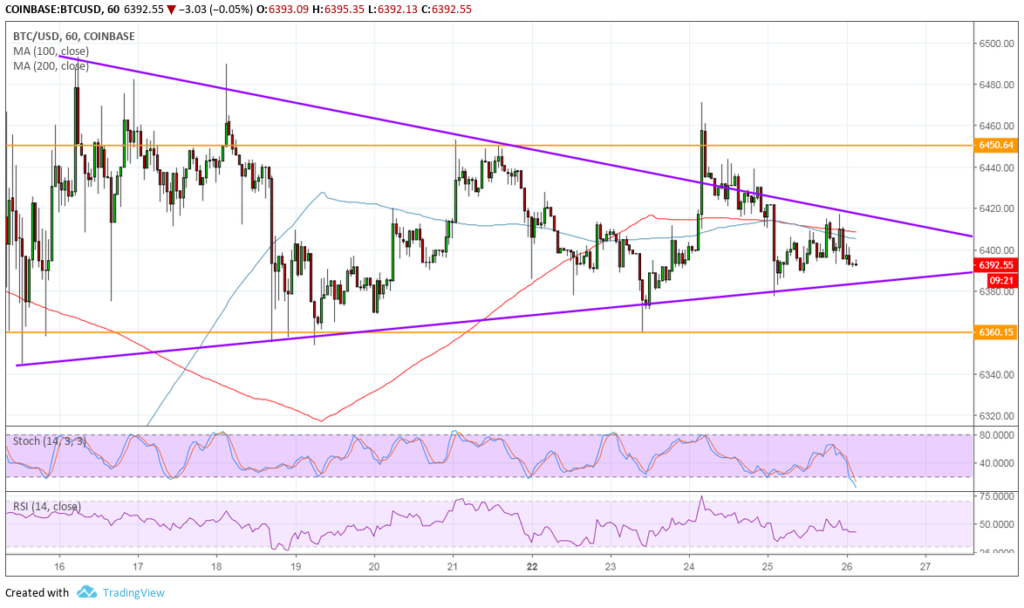 Bitcoin (BTC) Price Analysis – Which Direction Can It Break Out?

Bitcoin is stuck in consolidation for yet another day as it moves back to the triangle bottom.

Bitcoin continues to move sideways inside a symmetrical triangle and range visible on the short-term time frames. Price recently bounced off the range resistance and also the top of the triangle, setting its sights back on the bottom.

The 100 SMA is below the longer-term 200 SMA to confirm that the path of least resistance is to the downside. In other words, selling pressure is more likely to persist. In that case, a break of the triangle bottom might be seen, sending price to the range support at $6,360 or onto a slide that’s the same size as the consolidation patterns.

Stochastic is also heading lower to confirm the presence of bearish momentum, but the oscillator is already dipping into the oversold region to signal exhaustion. Turning back up could revive bullish pressure and allow support zones to hold. RSI is starting to turn lower after previously cruising mostly sideways, also reflecting a pickup in selling pressure.

Investors seem wary about the launch of ICE Bakkt futures possibly as early as next month, likely recalling how the CME bitcoin futures launched last year are being blamed for the sharp drop that ensued since then. There is also some degree of wariness associated with the Tether controversy.

Looking ahead, traders could continue to hold out for any major catalysts that could spur and sustain a breakout in either direction. By the way developments are going these days, it appears that there could be further upside, particularly on positive regulatory updates and progress in institutional platforms.

Note that Fidelity will be making its institutional platform for bitcoin and ethereum more widely available as early as Q1 next year so anticipation could build up leading to it. After all, it could usher in strong inflows from banks and hedge funds eager to place bets on the industry.