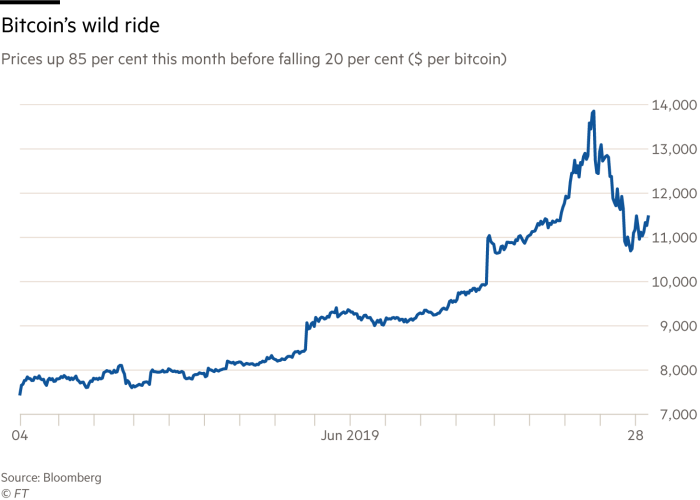 After bitcoin fizzled and popped early last year, Wall Street seemed to lose interest. Goldman Sachs went quiet on plans to open a desk trading digital assets as the price of the cryptocurrency plummeted, falling as much as 80 per cent. In October last year JPMorgan Chase chief Jamie Dimon doubled down on his initial scepticism, saying he did not “give a shit” about bitcoin at a conference.

But now that prices for bitcoin and other cryptocurrencies have climbed back up, some senior figures in the financial services industry are thinking again, wondering whether it was the spike or the crash that was the anomaly. Flow Traders, an Amsterdam-based listed trading firm specialising in exchange-traded products, announced in April it was adding cryptocurrencies to its line-up. Last month a group of 50 companies including Jump Trading and DRW — two high-frequency trading houses — and Mike Novogratz’s Galaxy Digital, a crypto merchant bank, formed a group to develop a “deep, efficient and secure” market.

“Over the past two years we have seen evidence building that bitcoin is an uncorrelated asset class so it makes sense to add it to portfolios,” said Marcus Swanepoel, a former Morgan Stanley and Standard Chartered banker now running Luno, a crypto company.

Bitcoin’s trajectory has certainly been eye-catching. Its price has more than doubled in two months, finishing the week around $11,800. This is some way off the highs of late 2017, but enthusiasts say the rally will continue.

Chief among the reasons offered by bulls are Facebook’s recent announcement that it will launch a new digital currency next year — which came a few months after JPMorgan created its own “coin” for payments — and a sharp turn in monetary policy from the US central bank. Along with dovish noises from the European Central Bank and the Bank of Japan, that has helped drive the value of negative-yielding debt around the world to about $12.7tn, according to data tallied by Bloomberg and Barclays. In that context, yield-less gold looks appealing — as does bitcoin.

“There is a lot of demand coming from Asia and Japan where bitcoin represents a wave of hope against a deflationary monetary environment,” said David Mercer, chief executive of LMAX Exchange, a currency-trading platform with about $400m a day in crypto volumes, which started offering cryptocurrencies last year. “It’s become a safe haven of the digital space.”

While demand for crypto remains driven by retail investors, particularly in Asia, institutional practitioners are increasingly getting involved, drawn by fat spreads and increasing volumes. According to Mr Mercer, six of the largest high-frequency traders on LMAX’s fiat-currency platform are active in the crypto market as well.

In public, big banks remain wary, although a head of electronic trading at a large US lender said traders would jump at the opportunity to trade crypto — a market with a total capitalisation of $336bn — if given the chance. Jan Strømme, a veteran of currency markets, set up a crypto-focused trading firm Alphaplate in August. He says young programmers and quantitative traders are shunning careers at banks to work at crypto-focused companies as interest from institutional traders picks up.

Graham Rodford, founder and chief executive of Archax, another crypto platform, started trading bitcoin six years ago as a side project from his day job as head of compliance at Omni Partners, a London-based hedge fund. A former head of operations at HSBC, he is betting that in the future hedge funds will do their fundraising through platforms such as Archax, and will trade all asset classes — including stock and bonds — in digital form.

“We have come a long way in terms of the market structure already with skilled professionals from the traditional world moving into this new emerging world and bringing with them a wealth of experience,” he said.

Arch critic Nouriel Roubini, who described crypto in May as “the mother and father of all bubbles”, is engaging in debate. Next week he is due to go head to head in Taiwan with Arthur Hayes, the founder of crypto exchange BitMex, and a former equities trader at Citi and Deutsche Bank, in an event billed as “the Tangle in Taipei”.

To Mr Swanepoel, the world is slowly moving towards a new monetary system. He believes his firm will soon be competing with the biggest banks, as the underpinnings of the financial system undergo a radical shift.

“The holy grail of the internet is to be able to move value peer-to-peer safely and securely and we can do this now with blockchain technology,” he said. “We just don’t yet know if it’s money or bitcoin or something else we should be moving around.”

Mr Mercer agrees. “Today the most efficient way to move money to Australia is to get on a plane and fly there with a suitcase,” he said. “This is clearly not going to last if you believe in blockchain technology.”